“The trait is not related to sex, and no evidence is found that it’s gene is lethal when homozygous.”
C H Danforth, (1947) Heredity of Polydactyly In The Cat, Journal of Heredity, 38

We had hoped by this time that we would have an MCBFA Maine Coon Standard that we could print in this issue. However we have stubbed our toe on two divergent ideologies concerning polydactylism.

An article is being written which will set forth both the arguments for and against polydactylism… We hope to have this ready for our next issue.” 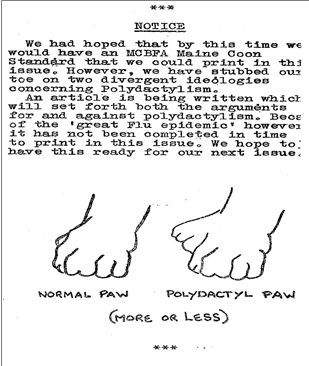 The Maine Coon Polydactyl Cat should conform to the Standard of the Maine Coon Cat, with the exception that multiple toes are allowed on either fore or hind paws, or both.

Polydactyl Registerations: — We are considering the possibility of requesting registering organisations to include the letter P with the registeration numbers on all poly cats. At the present time there is no way of tracing polydactylism by looking at a pedigree. This would be a boon to breeders, but will take some study. 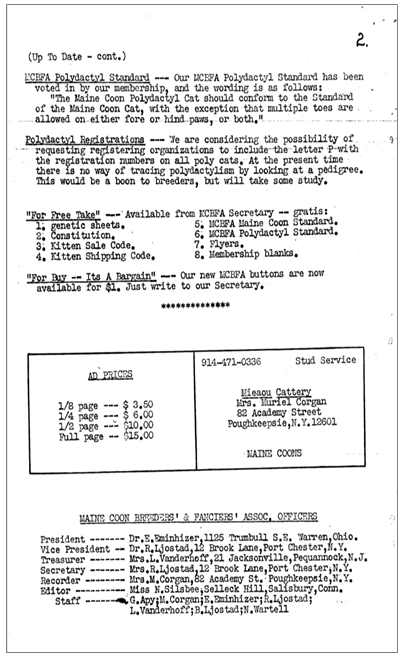 “We soon discovered that our task was not simple. We decided at an early date to concentrate on the usual Maine Coon and postpone efforts o n such variants as polydactyls … until such time as some progress had been made.»

Letter from the MCBFA Vice-President to a Mrs Benner, June 6, 1970.

» … we finally acquired a marvellous oil painting of a family of these cats. In desperation I finally said to the dealer that I just must HAVE the painting to go with my Maine Cat research and the cats themselves.The dealer replied that if he had known I was aware of what this painting represented, he would have sold it to me immediately, as he had no intention of ever parting with the canvas to anyone other than a lover of Maine Cats, and he really never expected to find such a buyer! The large and perfect canvas shows a white female with two kittens; one a white, the other a brown tabby poly. The painting with all it’s history with it and is dated 1876!»

The author of the above is Delanne L DuBois, All Saints Cattery, Houston, Texas. 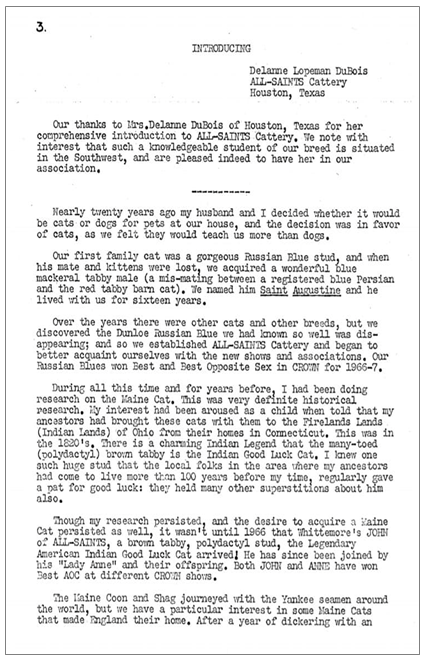 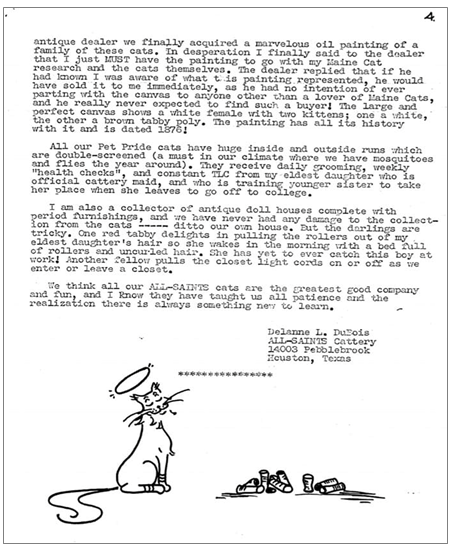 “A male calico Maine Coon Cat, belonging to …. has been missing since last Thanksgiving. He was born June 19, 1970, is polydactyl on all four feet …. This cat took home eighteen ribbons, rosettes and trophies from the Detroit show. If you should see or hear about this cat, please contact ….”
MCBFA Scratch Sheet, Summer 1971 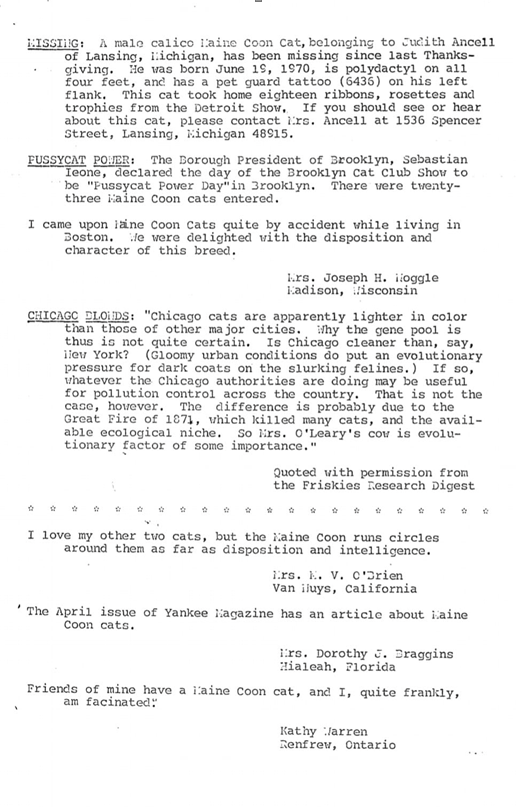 “We have a six toed kitten in our house too. You are right that they are not accepted at cat shows yet.
We knew that many Maine Coon Cats were polydactyl and did not want this trait to get entirely lost from the breed.
Then we heard that some of the breeders who had these cats were no longer breeding from them.
So my wife and I decided we had better get one and keep this trait going in the breed.”
Letter from the Vice-President to a Mrs Gould dated September 29, 1973

“The form of polydactly most often seen in cats is the result of a simple autosomnal dominant trait. It does not affect the cat adversely and is not know to be associated with other anomalies.”

“The fact that more than one form of polydactyly appears to be present in the cat should serve as a caution for breeders who wish to work with polydactyl cats. Special care should be taken in selecting breeding stock and cats with triphalangeal thumbs should probably be avoided as foundation cats.”

“As discussed by Wright and Walters (1980), polydactylism does “not seem to do the animal any harm … the same cannot be said for a number of other feline abnormalities caused genetically.” This is backed up by Dr Montgomery … who states “Polydactylism is a fairly common anomaly in cats that is not detrimental to their orthopedic soundness.”
Lucinda King (2004)

“Because double-pawed or polydactl cats have been a New England favourite for almost 300 years, one an trace the last three centuries migration of region resident by keeping an eye out for these large footed felines.”
By Lucinda King B.A.

It is not the intention of this article to provide a historical analysis, as much has already been written on the subject. According to Hartwell (2001-2004), «polydactyly is a common trait and is not the product of bad parenting». It appears to be a relatively common occurrence and statistics show that it occurs in every 2:1000 human births in the United States per year.

Ann Bolyen, Winston Churchill and King Charles VIII of France are famous polydactyls and Marilyn Monroe is rumored to have had an extra finger. In fact, Darwin speaks of polydactyly as an anomaly found in several mammals and fossil remains show clear evidence of early polydactylism. So what happened to all the polydactyl Maine Coons?

Unfortunately, it appears that this trait was bred into the Maine Coon simply to fit into the show world. Polydactylism was not seen in other breeds at the time and all other show standards for the breed indicated five toes in front and four toes in back. When the Maine Coon Breeders and Fanciers Association (MCBFA) was developing a show standard, there was a great deal of debate surrounding the issue of polydactylism.

Many thought it would be easier to have a standard for toes, in fact MCBFA literature going back to 1969 shows that it was never intended to disqualify polydactyl cats from shows and neither were they considered deformed or detrimental. In a letter dated September 29, 1973, then MCBFA vice president Mr. Ljostad says, «We knew that many Maine Coon cats were polydactyl and we did not want this trait to be completely lost in the breed. Then we learned that some of the breeders who had these cats could no longer breed them. So my wife and I decided it was best to get one and keep this trait in the breed.»

In earlier correspondence when discussing a standard for the Maine Coon ( 06/08/1971) Mr. Ljostad states, «We intend to continue breeding the cat that evolved of itself along the coast of Maine.»

This Polydactyl Maine Coon Standard is still in effect today, it has never been removed and it is here that an important dichotomy is found. The cat FAQ article on the MCBFA website states, «However, modern purebred Maine Coons are rarely polydactyl. This is because all cat associations automatically disqualify polydactyls from shows. Because of this, most polydactyls were eliminated from the Maine Coon breed decades ago, and only a few breeders still work with them.»

This helps establish that the attempt to eradicate polydactylism was motivated simply by show issues rather than health reasons. One wonders how much the Maine Coon gene pool suffered from this decision. Furthermore, this fact sheet admits that «…Some original Maine Coons were polydactyl.» Herein lies the controversy. Article 4b of the MCBFA constitution clearly states, «…protect the Maine Coon Cat from the elimination of any of its naturally evolved characteristics.»

While Article 4c completely contradicts 4b by stating that members should encourage «selective breeding towards the standard.» Since the polydactyl standard is neither shown nor discussed on the website, one can only assume that the selective breeding to be encouraged is that of non-polys. These two articles clearly do not marry, if as historical evidence suggests 40% of Maine Coons were polydactyl via the dominant Pd gene, then surely this is a natural evolution that should fall under article 4b. Yet strangely the FAQ sheet talks rather freely about «eliminating» polys from the breed.

If one looks at the MCBFA Code of Ethics, under the subheading of Breeding, one can find the statement that «My breeding stock shall be free of hereditary disease or deformity and shall not show any radical deviation from the standard of the Maine Coon.

All material on this site is copyrighthed and many not be printed or reproduced, in any form,without the express writen consent of Berkano Cattery.